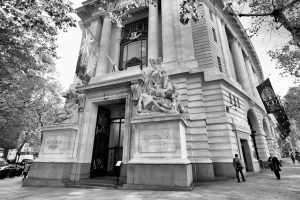 A major landmark on Strand, London, construction on the building by the Dove Brothers commenced in 1913. It was officially opened by King George V in a ceremony on 3 August 1918 attended by the Australian Prime Minister William Morris Hughes. The building was designed by Scottish architects, Alexander Marshall Mackenzie and his son, Alexander George Robertson Mackenzie following an architectural competition, the judges of which included Bertram Mackennal, John Longstaff, George Washington Lambert, Fred Leist and Arthur Streeton. The Commonwealth of Australia’s chief architect, John Smith Murdoch, travelled to London to work with the Mackenzie firm on the building.

The building itself, was built over a 900 year old sacred well drawing from the River Fleet, a subterranean London river. The water in the well is clear and has been tested as safe to drink.